Last month, Gawker’s Adrian Chen toyed around with Facebook’s new targeted advertising tool to reveal broad information about Facebook users. We we tried as well, and found some interesting results. Around 1,750 people in Washington D.C. “Like” lobbying. For Facebook users who currently work in Congress (staffers in both the House and Senate), 140 people placed lobbying as one of their interests: 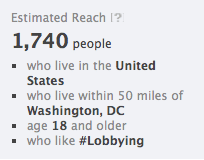 It’s possible that some of these people mean that they “like” lobbying as to meeting or eventually becoming registered lobbyists from non-profit public interest groups. But we suspect that many of these staffers genuinely view corporate lobbying now as a way to enjoy perks and as a future way to get rich. Capitol Hill has transformed over the years. Far from being a bastion of public service, it has become an incubator for people to gain experience and connections before taking high paying jobs to peddle influence for big corporations.