Most People Earn Their Wealth; Some Members of Congress Just Earmark It 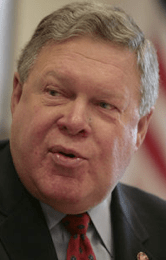 This week’s Washington Post series on earmarks concretizes what we all essentially knew:
they’re still at it.

“A U.S. senator from South Dakota helped add millions to a Pentagon program his wife evaluated as a contract employee. A Washington congressman boosted the budget of an environmental group that his son ran as executive director. A Texas congresswoman guided millions to a university where her husband served as a vice president.

“Those three members are among 16 who have taken actions that aided entities connected to their immediate families.”

This is the same arrogance that brought me down. To the public, these 16 members would argue till they are blue in the face that what they are doing is justified, appropriate and even good for the nation, and especially their districts.

Take, for example, the Washington congressman described above. Rep. Norm Dicks (D-Wash.) was chairman of a subcommittee that allowed him to secure millions in federal funds to clean up Puget Sound. That doesn’t sound all that bad, right? Turns out his son, David Dicks, soon after became director of the Puget Sound Partnership. The father and son worked in tandem, with the congressman directing tens of millions to his son’s agency – there were no competitors for the funds.

Dicks didn’t own up to these earmarks:

“Your kids are going to do things that you have been involved with,” Norm Dicks said. “I don’t think there was a conflict. We are all trying our best to restore Puget Sound.”

In my days lobbying, we would try to show a member of Congress how our goals were their goals, that it would benefit them politically at home. For these earmarks, they don’t need to be told it will benefit them at home. Some of them are literally paving the streets outside their houses!

The lofty perch on Capitol Hill leads these members to think they can do what they wish, including benefiting their family and friends with earmarks. I would bet that not one of them thought they would get caught, even though there is an army of journalists and investigators looking for this stuff. They do it because they can do it.

But in their hearts, I have to believe they know better.