VIDEO: Conservative Senator Jim DeMint Acknowledges Lobbying is the Root of the Problem 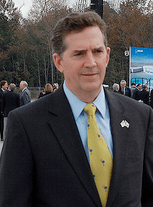 Senator Jim DeMint (R-SC) has plenty of views that one might consider pro-corporate, including his calls for Social Security privatization and across-the-board deregulation of industry. But even DeMint, a committed budget-cutter, acknowledges that the root of the problem in Washington D.C., from wasteful spending to laws that trample on individual rights, are a product of special interest peddlers.

We ran into the senator on Capitol Hill last week at anti-health reform rally. We asked DeMint if the pharmaceutical companies “played an outsized role in crafting the health reform bill,” to which he replied, “yes, because they always do.” PhRMA, the lobbying association for drugmakers, carved out a special deal with the White House that restricted the government’s power to negotiate for lower drug prices for seniors in exchange for support for the bill. Though the administration won crucial reforms to increase health coverage and ban abusive insurance company practices, powerful interest groups won other concessions. Health insurers, for instance, killed the Medicare buy-in and public option in favor of the individual mandate.

While the left and right may disagree with how to fix the health care crisis in this country, it’s worth noting that industry giveaways, from the PhRMA deal to the individual mandate, have rankled Americans of every political stripe. Republic Report followed up with a question about how to change Washington so that special interests don’t always dominate the legislative process:

FANG: Senator, do you think fundamental lobbying reform would reduce future Obamacares where industries come in and ask for billions of dollars in handouts and other earmarked funds? Do you think the root cause of the problem is that K Street keeps coming in, asking for special deals and that this will keep happening unless K Street is reformed.

DEMINT: Well, we need a balanced budget amendment so we have to balance our budget. Then, we could not do everything that people ask for. But that is a problem. Everyone who comes to Washington — except for these people — want more from government. These people just want to be free.

A number of Republicans are slowly recognizing that lobbying reform is a fundamental issue that must be addressed. State Senator Tom Davis, another South Carolina Republican, has argued that the Boston Tea Party was an effort to overthrow corporate power. Congressman Scott Rigell (R-VA) has called for a lifetime lobbying ban for members of Congress.