VIDEO: After Referring To Countrywide Scandal As Bribery, Darrell Issa Refuses To Say Republicans Who Received VIP Loans Were Bribed 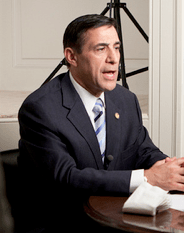 Last Friday at the California Republican Party’s spring convention in Burlingame, CA, Republic Report caught up with Congressman Darrell Issa (R-CA), who has been leading the investigation into the massive Countrywide bribery scandal. To Issa’s credit, his subpoena requests have revealed that members from both parties received heavily discounted mortgages, waived fees, and other special deals from Countrywide, the troubled subprime lending company that is now owned by Bank of America.

Before, the scandal was almost entirely a Democrat-only affair. Former Senator Chris Dodd (D-CT) received a discounted mortgage, and the news may have led to his decision to retire from the Senate in 2010. But in the last two months, it was revealed that Republican Congressmen Buck McKeon, Elton Gallegly, and Pete Sessions were also recipients of VIP Countrywide mortgages.

In previous years, Issa has called the Countrywide mortgage scandal a “bribe.” On an appearance with Fox News, Issa declared, “I call it bribes,” and mocked Democrats for not using the term. In a widely publicized showdown with Congressman Ed Towns, another Democratic recipient of a discounted Countrywide mortgage, Issa referred to the VIP mortgages as “an attempt to bribe” government officials.

So, we asked Issa if he would extend the same language he reserved for Democrats to newly identified recipients of special Countrywide loan deals.

FANG: You’ve called the discounted mortgages an attempt to bribe Congressman Towns. Do you think it was an attempt to bribe people like Congressman Buck McKeon?
ISSA: Well, I know you’re quoting something but you’re not quoting from anything I said.
FANG: I think that was from the Oversight website actually.
ISSA: I never said attempt to bribe. What I said was Angelo Mozilo and Countrywide attempted to influence government at all levels. An important detail.

Watch a compilation of our interview and Issa’s previous remarks, calling the mortgage program a “bribe”: