posted at 3:08 pm by David Halperin 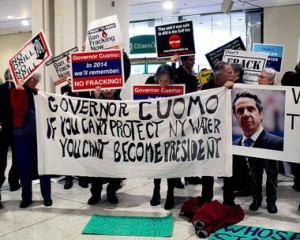 New York Governor Andrew Cuomo is in Charlotte today for the Democratic National Convention; he delivered an aggressive speech this morning to his state’s delegation, sharply criticizing the Republicans. But even in far-away Charlotte, Cuomo can’t avoid the growing chorus back home calling on him to reject the controversial natural gas extraction process of hydraulic fracking.

While Cuomo’s Administration has delayed its final decision, it signaled in June that it was preparing to allow fracking in five counties in the southwest part of the state.  A strong grassroots citizens coalition is growing in those counties and across New York state, concerned that fracking — which pumps massive amounts of chemically-treated water underground — may contaminate air and water and make local residents worse off.

Today the advocacy group Food & Water Watch, joined by scores of New York and other groups, published a full-page ad in the Charlotte Observer pointedly warning Cuomo, a potential future presidential candidate,”IF YOU FRACK NEW YORK, THE GROWING NATIONWIDE MOVEMENT TO STOP FRACKING WILL REMEMBER IN 2016.”

Last week Yoko Ono, Paul McCartney, Lady Gaga, Alec Baldwin and many other performers launched Artists Against Fracking to tell Cuomo that fracking is “a danger to New Yorkers.”  Meanwhile some town officials and landowners in southwest New York wrote to Cuomo urging him to promptly approve fracking, while seeming to acknowledge that continued public debate and citizen organizing on the issue might hurt their cause:

[T]he delay is only empowering opponents, some of whom have now taken to civil disobedience and other disruptive acts. While everyone supports the right of people to express their views, we see a situation where opponents are distorting the facts and trying to impose their views of what is right in our community.

Cuomo’s administration has previously indicated it will not permit fracking in the watersheds that provide drinking water to New York City and Syracuse. Earlier this week, a local board overseeing the Keuka Lake Watershed in southwest New York said it would request that Cuomo grant their region the same protection. Last summer, 59 scientists wrote to Cuomo that his administration’s rationale for protecting the New York City and Syracuse watersheds and no others was not supported by scientific evidence.

While Cuomo has pledged to make his decision based on “science, and not emotion,” there remains concern that another factor will play a role: big money. The New York Public Interest Research Group has reported that ten corporations or trade associations spent $4.5 million over the last three years lobbying in New York state on fracking and other natural gas issues. Chesapeake Appalachia, a subsidiary of troubled Chesapeake Energy, spent more than $1.2 million in lobbying expenses in 2010 alone. A report issued earlier this year by Common Cause / New York found that from 2007-2011, the natural gas industry made 2,349 campaign contributions to New York candidates and parties, totaling more than over $1.34 million.  Among Cuomo’s top donors in recent years are at least four corporate law firms that work on natural gas issues and have a presence in Albany — Manatt Phelps, Harter Secrest & Emery, Whiteman Osterman & Hanna, and Hiscock and Barclay.  There also are indications that pro-fracking forces have influence in the shadowy pro-Cuomo business group the Committee to Save New York.

Cuomo announced in July a new initiative to reform campaign finance and reduce the role of money in politics in his state. He will serve his citizens, and his future, best if he applies that principle to the fracking decision: Rely on science, and the best interests of New Yorkers, and don’t let big money influence the outcome.