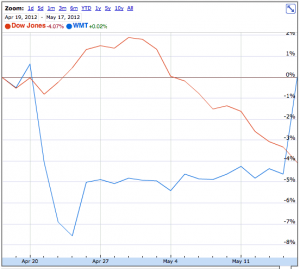 On April 21, the New York Times’s David Barstow broke a major story about Walmart’s alleged extensive bribery in Mexico to expand its presence there.  Yet, as you can see from the chart above, Walmart’s stock has recovered all of its value since the story, and it has outperformed the Dow by 4%.  The threat of legal action against Walmart executives and the company itself is apparently something investors just don’t care about.  Warren Buffett, no less, says he hasn’t changed his opinion on the stock.  He finds this scandal the result of a few bad apples, and said it could happen to any company.  This is, of course, despite revelations in the story that top executives at Walmart were responsible for covering up the bribery and killing the internal investigation.

But in a sense, Buffett’s point – that this could happen to any company – is right.  Because corporate crime simply does not matter, if you are big enough and politically connected enough.  Professors Frank Yu and Xiaoyun Yu found that lobbying dramatically decreases the chance that fraud will be detected at a company.

Using data on corporate lobbying expenses between 1998 and 2004, and a sample of large frauds detected during the same period, we find that firms’ lobbying activities make a significant difference in fraud detection: compared to non-lobbying firms, firms that lobby on average have a significantly lower hazard rate of being detected for fraud, evade fraud detection 117 days longer, and are 38% less likely to be detected by regulators. In addition, fraudulent firms on average spend 77% more on lobbying than non-fraudulent firms, and spend 29% more on lobbying during their fraud periods than during their non-fraud periods.

This isn’t a case of fraud detection, since bribery isn’t fraud and a reporter rather than the government detected the scandal.  But we can assume that the larger trend – more extensive legal rights for politically connected companies – is at work here.  And as the Republic Report found earlier this year, Walmart is number two among all companies in reported lobbying expenditures for 2012.

Much of Walmart’s story to investors involves its appeal to the global middle class, with Mexico leading the way.  So a scandal in which the company was caught bribing local officials would seem to have teeth.  After all, this is a textbook violation of the Foreign Corrupt Practices Act, the law that prohibits American companies from bribing foreign officials.  It’s a law that Walmart, through the US Chamber of Commerce – has lobbied to weaken.

What’s interesting about this most recent case is that the revelations about what seems like massive and systemic corruption within Walmart haven’t really created any significant problems so far for the company.  The stock market seems to think that Walmart is a pretty good investment, in spite of its alleged corrupt activities, or perhaps because of them.

As we’ve seen, again and again, political corruption through lobbying is one of the best investments you can make.  If you are a well-connected corporate actor, crime pays.