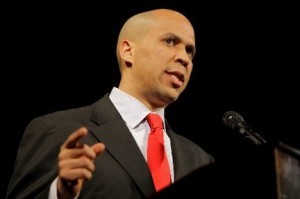 BOOKER: I have to just say from a very personal level, I’m not about to sit here and indict private equity. To me, we’re getting to a ridiculous point in America. Especially I know I live in a state where pension funds, unions, are investing in companies like Bain Capital. If you look at the totality of Bain Capital’s record, they’ve done a lot to support businesses and grow businesses. This to me is very uncomfortable.

Booker said his defense of private equity firms comes from a “very personal level.” And later that afternoon, the mayor did slightly retreat from his remarks. But there is perhaps another reason he jumped up to defend this industry.

Wall Street has been a huge backer of Booker’s campaigns. In 2006, “Lee Ainslie, the founder of hedge fund Maverick Capital Management LLC and a former protégé of Tiger Management LLC’s [Julian] Robertson; and D. Ian McKinnon, the managing partner of Ziff Brothers Investments,” maxed out in their donations to Booker’s campaign. Even putting aside direct donations to Booker’s campaign, Wall Street has also curried favor with the Newark Mayor through other routes. For instance, Bloomberg chronicled in 2010 how Booker worked to raise as much as $240 million from Wall Street and other American financial services hubs to invest in urban renewal in the city of Newark. By promising dollars for projects Booker backed, Wall Street has has possibly been able to exert a level of influence on him.

Robertson, the prominent Booker campaign supporter who helped finance a Newark Charter program on behalf of Booker, is a close ally to Mitt Romney. Robertson is a primary donor to Romney’s Super PAC, Restore Our Future. Robertson’s $1.8 million in contributions to Restore Our Future make him the second biggest contributor, next to Bob Perry.

Lee Ainslie, the other hedge fund manager that helped finance Booker’s career, has given $100,000 to Romney’s Super PAC.

Booker also serves on the Board of Advisers of the education advocacy organization Democrats For Education Reform (DFER), a group that has in the past advocated that charter schools fund political campaigns out of their per-pupil budget in order to advance education privatization. DFER’s board is packed with both private equity executives and hedge fund managers.

It’s very possible that Booker simply thinks that Bain and private equity are truly facing unfair criticism from the Obama campaign. But Booker’s comments should be viewed in light of his own affiliation with this industry as its titans push for their own agenda.

UPDATE: ThinkProgress notes that Booker received a total of $562,000 in campaign contributions from Bain Capital and others in from the finance industry for his race in 2002.