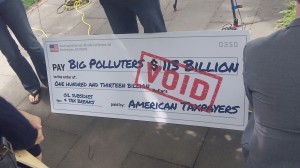 It’s simple common sense that pollution is a bad thing. We all know that breathing dirtier air, drinking less clean water, and having an unsanitary environment is bad for human beings.

But did you know that American taxpayers spend over $10 billion a year subsidizing it?

Last week, Rep. Keith Ellison (D-MN) and Sen. Bernie Sanders (I-VT) introduced a bill at a rally on Capitol Hill that would end the $110 billion in subsidies in the form of special tax breaks and spending that fossil fuel industries will get over the next ten years.

We talked to Rep. Keith Ellison (D-MN) about his bill. Ellison said that it will take a grassroots movement to overcome the lobbying that the industry is engaging in — the oil and gas industry spent $37.6 million lobbying the first few months of this year alone — and that the fossil fuel industries are using their record profits to funnel more money to Congress. Watch our interview with the congressman along with Sanders’ remarks at the rally: