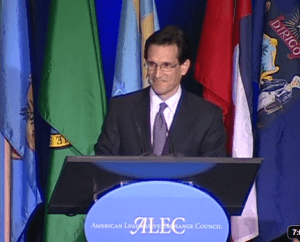 The American Legislative Exchange Council (ALEC) is one of the most powerful corporate front groups in the country, working to pass its Big Business-written bills in state legislatures across the country. What is less known about ALEC is that it also has a federal government agenda, including advocating for lower corporate taxes and supporting dirty oil pipelines.

Common Cause’s Nick Surgey first claimed today to find evidence of a $1,350 cash award that ALEC gave to House Majority Leader Eric Cantor (R-VA) in 2009. The award is identified by Surgey as the organization’s Thomas Jefferson Freedom Award, and Surgey also found video of him accepting the award:

Members of the House are actually prohibited from receiving any cash gift, and non-cash gifts must be valued below $50. Common Cause has wrote to Cantor for an explanation of this possible breach of ethics laws, and passed on its findings to the Office of Congressional Ethics.

After Common Cause published its investigation, Cantor’s office replied. They say that Cantor did not receive any cash award but instead received a bust of Thomas Jefferson. Common Cause responded to Cantor’s response by pointing out that his explanation contradict’s ALEC’s IRS filings and that if what Cantor says is true the group filed inaccurately.