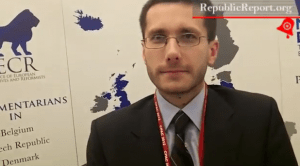 Last week, nearly 10,000 conservatives gathered at the Conservative Political Action Conference (CPAC) to discuss their ideology and goals for the coming year. At the conference, Republic Report ran into Radoslaw Fogiel, a Polish citizen who is the Vice Chairman of the European Young Conservatives. He was there representing his organization and the Alliance of European Conservatives and Parliamentarians (AECP), which represents conservative European political parties.
In an interview with Republic Report, Fogiel defended his country’s strict campaign finance laws — where elections are largely publicly funded — and explained that he viewed Big Money’s impact on elections to be undemocratic:

FOGIEL: Well, when the political system is financed through the budget, we have very strict laws regarding the money spending. We have to make very detailed paperwork after every election. What was the money spent? How much? So on and so on. When you make a mistake with this paperwork, you won’t get the money back.

JILANI: And you said that there are some billionaires in the United States now that are spending millions and millions of dollars to bankroll certain candidates. How do you think that’s bad for democracy?

FOGIEL: Well, in the democracy every man should have one vote and all the votes should be equal, right? So when someone has more influence because of the money — having money is nothing bad. It’s good that you can earn money. But if you can get more influence than maybe other people who are right but are not having money, that’s not fair.

Indeed, campaign finance laws are radically different in Europe, where Big Money plays a much smaller role in elections. Poland’s modern election laws, first introduced in 2001, led to a decrease in corruption and a more competitive electoral system that allowed parties to flourish which were not dominant during the previous Communist period. In some ways it is not surprising that a staunch European conservative like Foigel would defend such a system, as it allows for a wider range of voices from all parts of the political spectrum — left, right, and center.