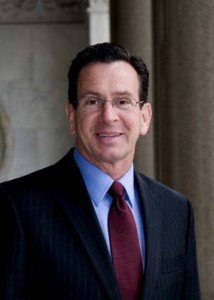 Last week, Governor Dannel Malloy (D-Conn.) had an opportunity to enact significant statewide campaign finance reform. Instead, he vetoed legislation that promised to be one of the most powerful disclosure laws in any state. As Public Campaign’s Nick Nyhart put it: “Malloy had a chance to be a national leader on reform, but opted to side with wealthy special interests and secret money.”

This bill, HB 5556, was intended to be a multi-pronged attack on secret money and its corrupting influence. Supporters have deemed it “disclosure on steroids” and “a dream package” for transparency by its many proponents, including the Connecticut legislature that passed it.

The bill would require groups to immediately disclose the cost, funding source, and target of any TV or radio ads or other communications that cost more than $1,000 and mentioned a candidate within 90 days of an election. Political advertisers who ran ads outside that 90-day window would have to disclose key information about their ads within 24 hours—faster than current law requires. Ambiguously named groups like “Connecticut Citizens for a Better Future” or “Americans for a Stronger Economy” would have to disclose all donors who gave $1,000 or more; they would also have to include the names of their top five donors in any political ads. Any corporate political spending greater than $4,000 would have to be approved by a vote of that corporation’s governing body.

Prominent leaders from both national political parties have called for increased disclosure (although some Republicans, like Senate Majority Leader Mitch McConnell, have abandoned those principles). Conservatives have historically supported transparency as a good balance to unlimited campaign spending. House Speaker John Boehner (R-OH), for instance, noted that “sunlight is the best disinfectant” while advocating for increased transparency. Both John McCain (R-AZ) and Newt Gingrich, have openly announced their support for greater disclosure. Democrats like Chris Van Hollen (D-MD) have also jumped on board.

Malloy, however, was quick to cry First Amendment rights. He also writes, “house Bill 5556 would have a chilling effect on issue advocacy and neutral debates about matters of public concern that should be the hallmark of our democracy”.

Limiting transparency counters the Supreme Court’s interpretation of the first amendment. Even while making the disastrous Citizens United decision, justices spoke strongly in favor of disclosure and transparency. While Malloy says he has “advocated for transparency in the elections and campaign finance process for a long time,” his veto action against open and transparent elections says otherwise.