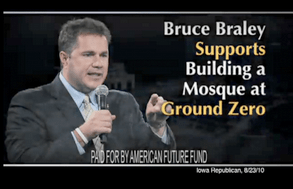 This morning, the New York Times broke the news that Joe Ricketts, the billionaire founder of TD Ameritrade, is planning to unleash a race-baiting advertising assault against President Obama late in the campaign. Rickets, who used his Super PAC to fund an upset victory in Nebraska’s Senate election this week, intends to finance the anti-Obama ads. Jeff Zeleny and Jim Rotenberg report:

“The world is about to see Jeremiah Wright and understand his influence on Barack Obama for the first time in a big, attention-arresting way,” says the proposal, which was overseen by Fred Davis and commissioned by Joe Ricketts, the founder of the brokerage firm TD Ameritrade. Mr. Ricketts is increasingly putting his fortune to work in conservative politics.

The $10 million plan, one of several being studied by Mr. Ricketts, includes preparations for how to respond to the charges of race-baiting it envisions if it highlights Mr. Obama’s former ties to Mr. Wright, who espouses what is known as “black liberation theology.”

The group suggested hiring as a spokesman an “extremely literate conservative African-American” who can argue that Mr. Obama misled the nation by presenting himself as what the proposal calls a “metrosexual, black Abe Lincoln.”

The article notes that Fred Davis, the advertising consultant who played a key role for John McCain in 2008 and many other GOP congressional campaigns, is helping to craft the ads. Davis was prevented from running similar ads in 2008 because McCain viewed them as derogatory and racially insensitive. The New York Times piece is a reminder that 2012 will be a far uglier campaign than the one Obama experienced when he first ran for president.

It’s also a stark reminder that the Supreme Court’s Citizens United decision may unleash a new level of ugliness in American campaigns. Technically, the decision only allows corporations and unions to spend unlimited amounts in elections. But in practice, Citizens United might fuel a wave of advertising designed to stir racial divisions and hatred against minority groups:

— Super PACs Are Less Accountable: Super PACs and 501c groups that buy advertising (see Stephen Colbert’s primer on “Spooky PACs“) can hide their donors. This makes it difficult for the public or the media to scrutinize an ad once it’s launched. These groups can appear one day, and disappear the next. In 2010, an undisclosed 501(c)(4) nonprofit called the American Future Fund aired race-baiting ads that hit Democrats for supporting a New York mosque at Ground Zero, allegedly built to honor the terrorists’ victory on 9/11. In reality, the ads misquoted the lawmakers, and the mosque in question was a planned community center headed by a cleric who has worked for the government, including the Bush administration, for years to promote peace.

— Candidates Have Less Control Of The Ads On TV: Limitless fundraising allows Super PACs to have the loudest voice in a campaign. And since Super PACs are legally prohibited from coordinating with candidates, politicians have less say over who defines their own message. In 2008, Fred Davis prepared a fleet of advertisements with racially tinged messages, hitting Obama for crime and for his association with Rev. Wright. But McCain took the high road and never allowed the ads to see the light of day. Davis explained the situation with Time Magazine’s Michael Sherer a few weeks after the election in 2008. Now, Romney has no power to stop Davis from preparing any type of ad for Joe Rickett’s Super PAC.

Dog whistle racism and other cheap campaign tricks, aired using front groups, have always been a factor in American political advertising. In 1988, an outside group called the National Security Political Action Committee, in coordination with the George H.W. Bush campaign, aired the infamous Willie Horton ad with heavy racial overtones.

But for the second time a major party will have nominated an African American candidate, the campaign landscape will be different. Obama and other candidates for office this year face any number of eccentric billionaires or corporate interests that may have no hesitation in poisoning the public dialogue with hate.