posted at 10:30 am by Suzanne Merkelson 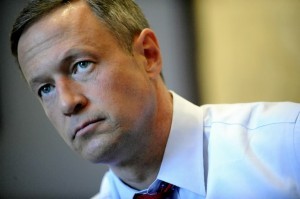 Maryland is home to 296 million broiler chickens. That many chickens means just one thing — lots of chicken manure, some of which is used to fertilize fields. According to a Waterkeepers study reported on by Grist, “billions of pounds of chicken litter have flowed into the bay in the decades since international poultry conglomerates such as Perdue and Tyson targeted the Delmarva Peninsula for their multi-million-dollar operations.” But that fertilizer runs off and pollutes the nearby Chesapeake Bay, which is so polluted it’s home to a “dead zone” that covers an entire third of the Bay, causing the University of Maryland’s Center for Environmental Science to recently award the Bay a D+ in a health report card. The poultry industry, Waterkeepers writes, has been “treating the Chesapeake Bay like an open toilet.”

So you’d think Maryland’s politicians, especially Democratic governor (and rising star in the Party) Martin O’Malley, would have a vested interest in protecting the Chesapeake, the country’s largest estuary. Not so much, as the group Food and Water Watch show, after obtaining 70 pages of emails between O’Malley and Perdue officials, especially the company’s general counsel Herb Frerichs, whom O’Malley knows from law school.

Grist highlights one exchange that’s particularly disturbing given O’Malley’s deference to Purdue’s wants. Purdue, Grist writes, “gets to give direction to Maryland’s Department of Agriculture”:

What is it about the Secretary of Agriculture’s job performance that you find lacking?

I just feel like I’m trying to push a bunch of stuff and I don’t see him around. He’s not as strong as his counterparts in DE and VA. I work w all three.

I’m guessing you don’t have the personal email of governors of DE or VA, so let me know when Buddy [Earl “Buddy” Hance, Maryland Secretary of Agriculture] can/should be doing more to help you push stuff. I’m serious. I’ll have him call you monday.

Frerichs is a partner at the law firm that represents Perdue in the Clean Water Act lawsuit by environmentalists for pollution. O’Malley has stood with Perdue against the lawsuit, according to Food and Water Watch, “going so far as to support legislation that would defund the Maryland School of Law clinic that represents the plaintiffs in the case.”

O’Malley’s relationship with Purdue is about more than law school buddies. The Baltimore Sun reports that around the time the emails between O’Malley and Frerichs started, Purdue’s political giving pattern changed:

Perdue wrote annual checks to the Republican Governors Association until 2010…when the company suddenly also started donating to the Democratic Governors Association, which is headed by Gov. Martin O’Malley. The firm gave the DGA $10,000 in 2010 and $15,000 in January 2012.