GRAPHIC: How The U.S. Chamber Of Commerce Uses Its “Spooky PAC” To Funnel Corporate Cash Into Secret Attack Ads

As Stephen Colbert rightfully pointed out earlier this week, a 501(c) organizations — which he termed “Spooky PACs” — operate like Super PACs, except that they are completely secret organizations that do no reveal any of their donors. Like Super PACs, 501(c) groups can raise unlimited corporate and union donations, and can spend that cash on independent expenditures, better known to voters as attack ads, automated telephone calls, and political mail.

The biggest Spooky PAC since the Citizens United decision has been the U.S. Chamber of Commerce. The Chamber trades on its brand. People think the U.S. Chamber, based in D.C. across the street from the White House, is somehow related to their local chamber of commerce. Rather, the U.S. Chamber is a partisan lobbying force that raises large sums of money from multinational corporations to elect pro-big business candidates.

The Republic Report was the first to reveal all known contributors to the Chamber. But because the Chamber faces no disclosure requirements, we only have a small piece of the puzzle.

United Republic’s Jasper McChesney put together this infographic that shows how direct corporate cash, from firms like Prudential Financial and Coca-Cola Inc, flows into the Chamber secretly, and is then used for nasty attack ads: 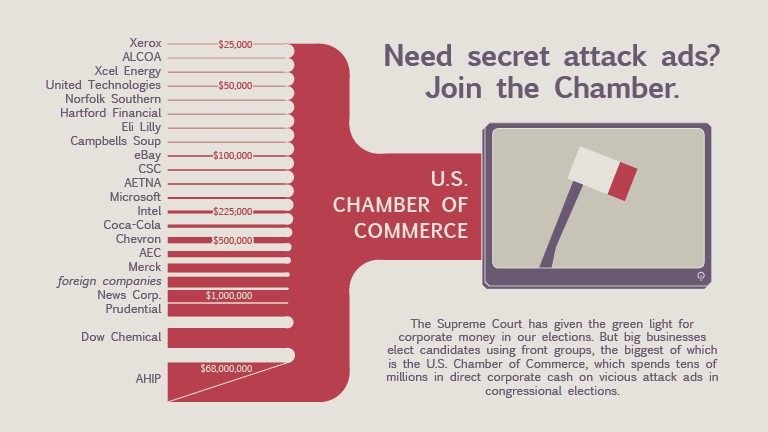 The Chamber led the biggest attack ad effort of the 2010 midterm election. And now, the Chamber again is leading among the Spooky PACs active in 2012. Just this week, the group announced another round of ads, targeting Senator Bill Nelson (D-FL), Rep. Kathy Hochul (D-NY), and many others.