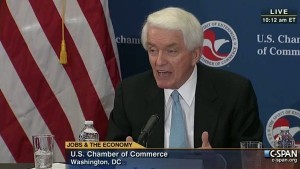 Late last year, the Montana high court, citing the state’s long history of corporate money corrupting politics, defied the U.S. Supreme Court’s Citizens United decision and continued enforcing the state’s 100-year old law banning corporate involvement in state elections. The Supreme Court has blocked the Montana court’s decision pending on its own determination as to whether to formally hear the case this fall. Allowing a full argument in matter could allow the Court to  reconsider the merits of the Citizens United decision, which opened the doors to unlimited corporate and union involvement in American elections.

Now, attorneys for the U.S. Chamber of Commerce, a 100%-corporate funded lobbying group that has used the Citizens United decision to pump tens of millions of undisclosed dollars into federal elections over the last two years, is fighting to maintain the status quo. And they don’t want the justices to consider the evidence that the Citizens United decision, along with prior examples of corporate involvement in campaigns, causes corruption.

At the heart of the issue is whether the Citizens United decision has increased corruption. Justices Stephen Breyer and Ruth Bader Ginsburg, in a statement about the Montana decision, said the court must make clear if “Montana’s experience, and experience elsewhere since this Court’s decision in Citizens United v. Federal Election Commission, make it exceedingly difficult to maintain that independent expenditures by corporations ‘do not give rise to corruption or the appearance of corruption.'”

Interest groups and politicians are lining up to offer briefs to the Supreme Court. Some, like Senators Sheldon Whitehouse (D-RI) and John McCain (R-AZ), have submitted a brief urging the court to overturn Citizens United.

But on the other side of the issue, the U.S. Chamber of Commerce has submitted a brief arguing that unlimited corporate spending in elections should be maintained. The argument? The Chamber says there is “no evidence” that corporate electioneering has given rise to corruption anywhere. Moreover, the Chamber says that if there is “empirical evidence” that states have been corrupted by corporate involvement in campaigns, the court “should not” consider it. Here’s a quote from the Chamber’s brief (which was filed with help from the law firm Wiley Rein):

But even if the Court were inclined to reconsider Citizens United based on empirical data, which it should not, there is no evidence in the record of this case detailing the level of spending on political speech since Citizens United was decided. Pet. 27-28. The Montana Supreme Court only considered evidence of corruption in Montana “during the early twentieth century,” Pet. App. 17a, and, even then, the evidence had nothing to do with independent expenditures, see supra p.11. Moreover, this Montanaspeciﬁ c evidence offers no insight into the effect or scope of corporate speech in the rest of the country. As this Court is aware, a majority of states permitted corporations to speak freely long before Citizens United, yet there was no evidence then (and there is no evidence now) that elections in those states have been corrupted by immense corporate wealth. Citizens United, 130 S. Ct. at 909 (citing Supp. Brief for Chamber of Commerce of the United States of America as Amicus Curiae at 8 -9). In short, this case is not a suitable vehicle for addressing the question that Justice Ginsburg posed in the Stay Order.

There is a mountain of evidence that corporate independent expenditures give rise to corruption. As Alexander Polikoff has noted, in a case that ruled that much of the Bipartisan Campaign Reform Act was constitutional, “one of the trial judges had summarized the following from a trial record that ran over 100,000 pages”:

— Corporations and labor unions routinely notify Members of Congress as soon as they air electioneering communications.

— Members of Congress express appreciation for those communications.

— Campaign organizations are aware of who runs advertisements on the candidate’s behalf, and when and where they are run.

— Members of Congress seek to have corporations and unions run such advertisements.

— After elections are over, corporations and unions often seek “credit” for their support.

If the Supreme Court can’t find any evidence that corporate independent expenditures make a difference in terms of voting patterns, justices should consider the U.S. Chamber of Commerce as part and parcel of the problem. The Chamber topped all other corporate independent expenditures in the last election, the 2010 midterms, with a $75 million campaign war chest used to elect big business-friendly members of Congress. The ad spending helped reverse the ideological makeup of Congress and boost the GOP’s numbers in the Senate.

Republic Report cross-referenced the Chamber’s key vote guide with the Chamber’s attack ad budget, which benefited Senators Rubio, Johnson, Hoeven, Kirk, Scott Brown, Boozman, Coats, Moran, Paul, Blunt, Ayotte, Portman, and Toomey. And unsurprisingly, every senator who received campaign ads on behalf of the Chamber has voted in agreement with the Chamber 70-100% of the time. In fact, after Ron Johnson (R-WI) won his closely contested race with Russ Feingold (D-WI) with the help of million of dollars in corporate independent expenditures aired by the Chamber, Johnson traveled to the Chamber to personally thank its lead lobbyist, Tom Donohue.

As we exclusively reported earlier this year, the Chamber is funded by big donations from firms like Coca-Cola, Prudential Financial, eBay Inc, and Dow Chemical, among others.