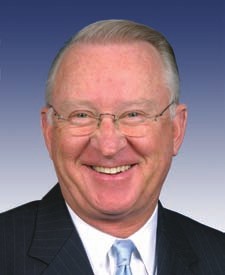 Armed Services Committee Chairman Congressman Buck McKeon (R-CA) is best known today as the weapon industry’s go-to lawmaker for expanding the use of domestic drones in America. But in 1998, the congressman accepted a discounted mortgage from subprime mortgage giant Countrywide as part of the company’s wide-ranging efforts to bribe public officials. (No one has been charged with bribery, but the loans were clearly doled out “in order to influence the judgment or conduct.”) Though McKeon told the Los Angeles Times this year that he had no idea that his Countrywide loan was “VIP,” e-mails released today by the Oversight Committee show that that McKeon family were well aware of their preferential treatment.

The Oversight Committee report reveals e-mails and letters from Countrywide to McKeon. Previously released e-mails show that a Countrywide employee instructed loan officers to give McKeon a special deal, noting, “Per [Countrywide CEO] Angelo [Mozilo] — take off 1 point, no garbage fees, approve the loan and make it a no doc.” But the new e-mails show even more evidence that McKeon was aware of, and accepted an unethical gift from a company seeking influence in government.

When the news broke earlier this year that McKeon had participated in the VIP Countrywide program — which has ensnared former Clinton and Bush administration officials, as well as Senators Chris Dodd, Kent Conrad, and others with cut-rate mortgages, discounted interest rates, and “no doc” loans — McKeon aggressively denied any knowledge of a special deal:

McKeon’s office said McKeon had never met or spoken to Mozilo and was “shocked and angry to hear this, as he had no knowledge of the Friends of Angelo designation.” In an interview in his Capitol Hill office last month, McKeon said he had paid the “garbage fees” and did not get a point off on the loan.

The evidence, however, shows that McKeon shouldn’t be surprised about the special nature of the Countrywide refinance he received in 1998.

In 1998, a mortgage industry lobbyist named Mike Ferrell had been working to persuade Congress to raise the maximum loan amount for FHA single-family insured mortgages. McKeon — who at the time, was dealing with the bankruptcy of his family’s cowboy fashion store business — seemed willing to accept a discounted mortgage. An e-mail released today shows a Countrywide employee, acting on a recommendation from Ferrell, instructing a loan officer to give McKeon a VIP loan. View a screenshot below:

A call sheet obtained by the Oversight Committee reveals that Countrywide employees had discussed the VIP program with McKeon and his wife, Patricia. McKeon, the call sheet notes, was “on the edgy side”:

FOA [Friends of Angelo] referral, Please order appraisal ASAP. You may call the borrower at his Washington office [number redacted] and get the Sons phone number for the appraiser contact. The borrower would like to hear from the appraiser this week. The borrower is a bit difficult to deal with. He seems on the edgy side.

Perhaps the most damning piece of a evidence that McKeon had full knowledge that he received a special deal from Countrywide is the copy of the letter the company sent him with an offer of the loan. The letter opens “Thank you for allowing Countrywide’s VIP team to assist you with your financing needs.” It is stamped “THE VIP TEAM.” See a screenshot below: 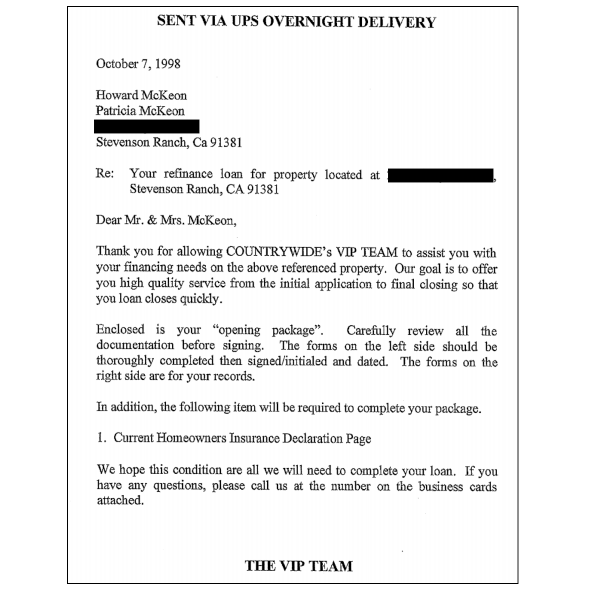