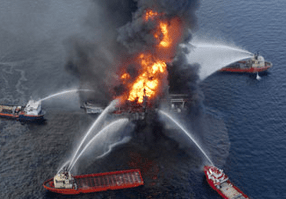 Two years after BP’s horrific oil spill in the Gulf of Mexico, there are still signs of environmental and economic havoc. Recent investigations from al Jazeera and the Associated Press have found shrimp without eyes, crabs without claws, and many species of fish that carry strange deformaties and other signs of mutations. ThinkProgress notes that a new study published in the Canadian Journal of Fisheries and Aquatic Sciences determined that over seven years, the oil spill could have a $8.7 billion impact on the economy of the Gulf of Mexico including losses in revenue, profit, wages, and close to 22,000 jobs.

BP has escaped serious accountability by flexing its political power. Under intense lobbying pressure, Congress failed to enact legislation that would even expand BP’s civil liability.

For the two year anniversary of BP’s Deepwater Horizon oil spill, Republic Report has compiled some of the best stories on BP’s efforts to influence government and avoid taking responsibility for its actions in the Gulf:

— ABC News: BP turns to political shop for $50 million ad buy to convince you the company ‘Will get this done’ and ‘Make it right.’

— ProPublica: Take It With A Grain Of (Sea) Salt: Gulf Microbe Study Was Funded By BP.

— ThinkProgress: BP worked with FreedomWorks and the Chamber to build “grassroots” support for more drilling.

NPR is reporting that the first ever criminal charges were filed today against a BP employee. BP engineer Kurt Mix has been charged “with obstruction of justice for allegedly deleting text messages” related to the spill after it occurred.