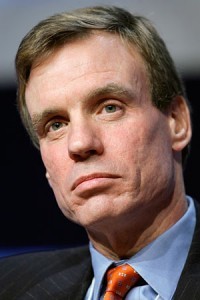 Last week, the American Bankers Association (ABA) — a leading lobbying group for Big Banks —  held a large lobbying meeting in Washington, D.C. Thousands of bankers packed the halls of the Omni Shoreham Hotel to hear Members of Congress praise their industry and encourage them to back certain pieces of legislation.

The only Democratic Party senator who spoke before the assembled audience was Virginia’s Mark Warner. During his speech, Warner spoke of his efforts to raise the Social Security retirement age — which would involve a major cut to a program that would largely impact blue collar workers the most — with his endorsement of the Bowles-Simpson economic plan.

As he was leaving the ABA summit, we asked him why he was willing to cut programs for poor and middle class Virginians yet he was not endorsing any plan to tax the bankers he just spoke before (whose large economic institutions caused a recession that plunged millions into poverty).  Watch Warner’s response, where he declines to endorse requiring banks to share the burden of reducing the deficit:

There are a number of ways to tax the banks to recover some of the wealth they destroyed globally by helping set off the recession. One of the most popular ways is a financial transactions tax. A 50 cent tax on every $100 dollars of Wall Street trades and other transactions could bring in as much as a whopping $350 billion a year.

Perhaps one reason Warner won’t endorse higher taxes for banks is because the financial industry is the single largest donor to his campaign.