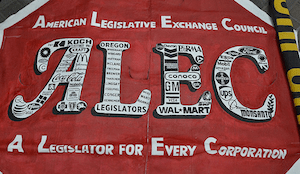 The New York Times’ Mike McIntire published a bombshell story about the American Legislative Exchange Council this weekend. Using internal ALEC documents provided to the Times by Common Cause, a good government reform watchdog organization, McIntire revealed how the group’s policy task forces are designed so that corporate lobbyists — not state lawmakers — have the final say in developing legislation.

As Republic Report and many other investigative outfits have uncovered, corporate lobbyists use ALEC as a front to develop radical giveaways to big business. ALEC drafts and enacts legislation designed to do everything from crushing competition in the telecom market to ensuring that big businesses do not have to pay for their pollution.

McIntire’s scoop, however, provides a window into the internal structure of how the ALEC sausage is made:

ALEC says that its lawmaker members have the ultimate say over its policy deliberations, and that no model bills are adopted unless its governing board, made up entirely of legislators, approves it. But the organization’s rules give corporations a great deal of influence on the task forces, where model legislation must first clear a preliminary vote before going to the board. As a result, meeting minutes show, draft bills that are preferred by a majority of lawmakers are sometimes killed by the corporate members at the table.

In August, the telecommunications task force met and considered a model resolution regarding online piracy that had been introduced by the U.S. Chamber of Commerce. Although AT&T, Verizon and AOL could not agree on the details, the lawmakers present overwhelmingly supported the resolution in a 17-to-1 vote. However, because the corporate members deadlocked 8 to 8, the bill failed.

The article also points out that a small number of multinational corporations, including AT&T and Reynolds American, disproportionately provide much of ALEC’s budget:

ALEC, which is registered as a public charity under section 501(c)(3) of the tax code, traces its roots to 1973, when the conservative activist Paul M. Weyrich and several other Republicans sought to create a state-level clearinghouse for conservative ideas. Although its board is made up of legislators, who pay $50 a year to belong, ALEC is primarily financed by more than 200 private-sector members, whose annual dues of $7,000 to $25,000 accounted for most of its $7 million budget in 2010.

Some companies give much more, all of it tax deductible: AT&T, Pfizer and Reynolds American each contributed $130,000 to $398,000, according to a copy of ALEC’s 2010 tax returns, obtained by The Times, that included donors’ names, which are normally withheld from public inspection. The returns show that corporate members pay stipends — it calls them “scholarships” — for lawmakers to travel to annual conferences, including a four-day retreat where ALEC spends as much as $250,000 on child care for members’ families.

RELATED: ALEC Tries To Fight Back, While Activists Groups Keep Racking Up Victories