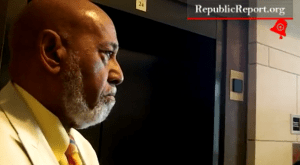 The for-profit college industry includes many schools that are scamming students and taxpayers. The industry accounts for 11 percent of college students but a whopping 44 percent of student loan defaults. Meanwhile, the industry has sucked up billions of dollars of taxpayer money through loans and grants without any proper oversight.

The reason it can do this is because of the army of lobbyists and public relations consultants that it has hired to keep the support of Congress.

When Fang and I asked Hastings for an interview in the Capitol Building, he was explaining to a group of students about how we can’t fix our schools without making sure there are better teachers in the buildings — something which is especially ironic given his support for the dismal for-profit education sector.

Hastings quickly agreed to an interview, and I started to explain how it’s a huge problem that the federal government continues to allow taxpayer money to flow to subprime colleges that leave students in debt and with near-useless degrees.

“I disagree with your premise, I believe that there are bad for-profit colleges, and then I believe that there are bad, in terms of where you’re coming from, there are bad colleges in this nation who are not dealing with the subject of educating people. I don’t agree with all…if you lump everybody into any one thing you will find the same kinds of concerns that Arne Duncan and the rest of them have demonstrably pointed to, I can take you through the entire college system of America and show you similarities,” he responded.

“But this sector overall, has much worse results, and continues to get goverment funds,” I said.

“Your view is that they just have much worse results.”

“Hold on just a minute —  you’re asking me and I’m telling you I know more about gainful employment than you would know if you were born again,” he told me.

“Well sir,” I started. “They fund your campaign, they don’t fund my campaign. That may be why you’re giving their spin. Will you give their money back? Do you really appreciate their funds?”

Hastings then got a very serious look on his face and grabbed my shoulder. “Let me make it clear to you son. When my mother died, the last two years of his life, there were eight persons who helped with their care, every one of them went to a for-profit college. End of story.”

He then walked away.

“Sir, why are you helping out colleges that were recently raided by the FBI?” asked Lee as the congressman continued to walk away. We repeatedly asked Hastings about his continued support for for-profit lobbyists and the sector, but he continued to walk, refusing to answer any more questions.

Watch our interview of Hastings and his hasty retreat:

The education sector is Hastings’s top donor this election cycle, with large donations from for-profit college lobbying groups, DeVry, Bridgepoint, and other scam schools. These donations seem to have an impact, as Hastings has consistently defended the industry’s atrocious behavior towards students.